How the German Got Its Name 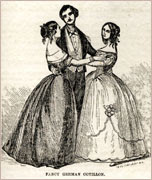 The German Cotillion is a sort of dance party with games. It was done in American from the 1840s through the end of the century, but it got wildly popular in the years just after the Civil War.

There are two ways to spell it: Cotillon or Cotillion. There are also two ways to pronounce it. In French, it's pronounced, coat-EE-own, and in English, COAT-ill-yon. They seem pretty interchangeable in the mid-nineteenth century.

First, here is a bit from Howe, which talks about the name and spelling, At this point, Howe is not talking about the party games version of a cotillion:

COTILLIONS OR COTILLONS* ARE OF ENGLISH ORIGIN, And were first danced by four persons standing as the first four now do, in the set; two more couples were afterwards added and formed the side couples; thus the English Cotillion and the French Quadrilles are now formed precisely alike, and it is equally proper to call the dance by either name.

Here is a quote from Coulon, an English dancing master, which discusses the fact that the name gets recycled for another dance, and also mentions the German origin of the new dance:

The Cotillon is a dance that was known upwards of fifty years ago. It was danced by eight persons, like the French Quadrille, which, perhaps, owes its derivation to it. The new Cotillon was introduced in Germany and Russia a few years ago, but it bears no resemblance whatever to the old or original Cotillon. It is danced in Germany with the Waltz step, and recently in Russia it has been introduced with the Mazurka step.  (Eugene Coulon, Coulon's Hand-Book, London:1860? p. 5.)

And here, a much later American dance manual is definitely talking about the party games version of the dance and makes the name change to "The German" clear:

This dance was introduced in New York about the year 1844. At that time the quadrille was the fashionable dance, but was known as the cotillion. To make a distinction between that and this dance, which was known in Europe by the same name, this was called the "German Cotillion;" gradually the word cotillion was dropped, the dance becoming simply "The German."  (Allen Dodworth, Dancing and its relations to education and social life, New & enl. ed., New York, London, Harper & Brothers, 1900. p. 145.)
Barbara Menard Pugliese at 12:48 PM